I had a sign-up tutorial with Graeme on Monday. We did a triad in last semester and he knew some of my practices already. It is good to chat with him and show some progress since the last triad.

We didn't talk much about my object assemblage because that is the most developed one among my projects. I asked him about the possibility of owls series and the narratives in it. Also, the thinking of putting human element into photographs. For myself, I'd already tried to create a more concrete plot within my pictures but somehow it is difficult to completely realise the image in my mind and this way of working sometimes would restrict my imagination as well. Graeme suggested Japanese director Akira Kurosawa's film "Dreams" to me. I couldn't find the dvd in school's collection so I did some research online. I found some stills and got some ideas of this movie. Those stills are very attractive to me visually. There is unknown, mysterious and magical atmosphere in those pictures. This will be a good direction for me to create my images more freely.

Furthermore, we talked about the human figures appearing in the photos. I showed Graeme the photo below, a test shot of human appearance in the domestic environment. He said it was good to only show part of human body such as hand. The composition which only showed a hand might generate curiosity and imagination of what happened outside the frame. The picture only provided clues rather than answers. I liked the idea and how he read the photograph. I plan to use different body part like hand, foot, hair, elbow or finger to interact with a troop of owls. I hope I can create that kind of unexpected and sneaking feeling. 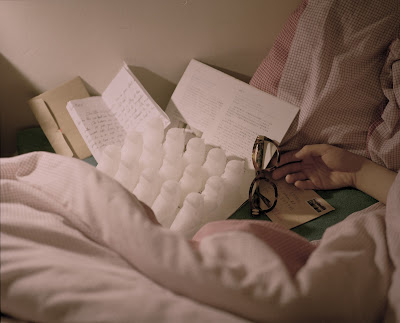 We viewed some photographs of my side project as well. Those abandoned Christmas trees. I told Graeme that it was difficult to link this project with my other projects. I just couldn't find the relation between them. However Graeme proposed his idea about the connection. My object assemblage is mainly about collecting, ownership and possession. On the other hand, these Christmas trees are previously owned and abandoned afterward. Also the purpose of Christmas tree is another interesting perspective to look at. They are specifically for Christmas holiday and their life-span is approximately one month. They are thrown out after the holiday, after the joyful party. This explanation is actually quite close to my mind. Personally, I am that kind of person who hardly throw stuff away especially those things which have precious memory. In my cognition, Christmas is an important and memorable holiday in western society so it is quite severe for me to this flood of Christmas trees on the streets. Although I know it is impossible to preserve them, the contrast of being in a cozy living room and besides a bin still make me sad.

However, in terms of visual characteristic, it is still not that easy to put these two bodies of works together cohesively. TOUGH CALL! 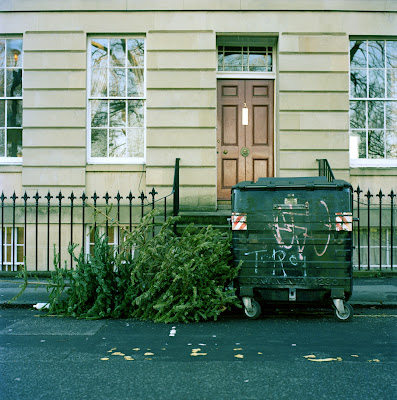 I had to say again that it was really good to talk to Graeme. Thank you very much!!!